The “kid” horse represents the most valuable equine out there.  Searching for one can mean frustration, disappointment, and the realization that “kid” does in no way mean “cheap.”

The irony of the “kid” horse is that there are just not too many out there.  Those that have one are very unlikely to part with it.  There is always another child on the way, or a grandchild almost of age, or a neighborhood kid in search of a starter horse.  A former client and friend could not count the number of 4-H members who had started on a little pony he still owned.  After getting the youngster off on the right foot and prepared for a more challenging horse project, the pony was re-assigned.  At well over 30-years old, he was retired to live a deserved life of luxury in the pasture.  The owner of a “kid” horse with no opportunity to use him in such a manner will justifiably put a large price tag on him, having invested a lot of time in training and care while receiving self-satisfaction from his horse having served others well.

In evaluating a potential “kid” horse, age should be a consideration.  Too often new horse enthusiasts want to find a yearling for their child so the two of them can grow up together and learn together.  While romantic, such a scenario is unrealistic and potentially dangerous.  The child needs to learn horsemanship, husbandry, and responsibility around an animal who has already learned the ropes.  This does not mean that some young horses are not great with kids, but, in general, good “kid” horses have some age and miles on them, having experienced much.

Another benefit of looking at an older horse is that they have experienced most major health concerns that are likely to strike them through the years.  Those new to the horse-owning world are often prepared monetarily for animal, feed, boarding/barn, and tack, but fail to budget for routine and unexpected veterinary care.  While such care is part of the total equine education experience, a sound health profile in the “kid” horse allows for more time to be focused on horsemanship and husbandry.

The “kid” horse accepts vaccinations and medications comfortably, having experienced health management operations commonly.  He is comfortable around the farrier and readily accepts his feet being handled for routine and corrective procedures.  Such a comfort level with handling breeds confidence in the new horse enthusiast, nurturing the human-equine bond.

The “kid” horse has worn a saddle backwards, a bit upside down and inside out, and been put up wet.  He has interpreted contradictory cues from many an inexperienced rider.  He has had more than his fair share of kids pass under his belly and walk too close behind him, while never flinching.  He has the ability to acknowledge the experience of the rider and adjust the cruise control accordingly. 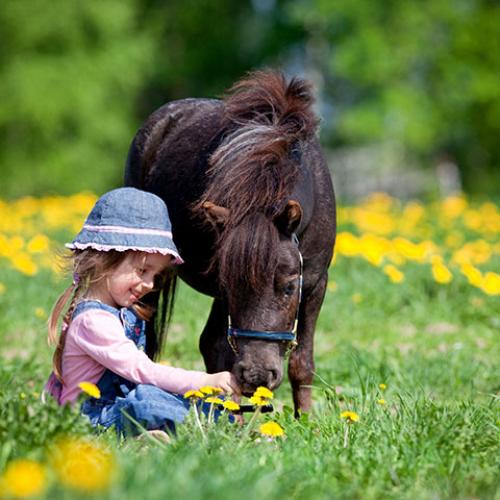