Historically, the most effect way to control parasites was believed to be by deworming every 8 weeks with a rotation of the class of active ingredient used. This incorrect approach has resulted in the development of resistant strains of parasites. Individual worms develop resistance to a particular drug due to random genetic mutation. Indiscriminate deworming kills off the competition and gives these worms an advantage for survival. The more frequently the horse is dewormed with the resistant chemical, the quicker the population of resistance worms increases.

The solution appears to be in strategic deworming. Egg counts in the manure are done and the horses that are heavy shedders are dewormed and those that are light shedders are not dewormed at that time. Confirmation that the treatment worked is produced by completing a second egg count 10-14 days after treatment. This selective deworming will not eliminate resistance but will slow it down.

Three major classes of chemicals exist to deworm horses: Benzimadazoles, pyrimidines, and macrocyclic lactones. All work against large strongyles and ascarids. Large strongyles are easily controlled and do not present a significant problem. Small strongyles (cyathostomes) present the greatest threat to the horse and these parasites are resistant to 2 of the 3 classes of chemicals. Only the ivermectin/moxidectin products are still effective. These wormers are less effective than they were several years ago, evidenced by an earlier egg reappearance rate after treatment. New chemicals are needed for controlling parasites in horses.

Work with your veterinarian to perform egg counts on your horses and identify the high shedders. The vet can recommend a treatment and determine effectiveness by egg counts after said treatment.

There are some management procedures that you can do to help control the parasite load in your horses.

1.  Allow at least two acres of pasture per horse. This will give horses enough room to establish “toileting” areas, which they naturally avoid when grazing.

2.   If available, periodically rotate horses to another pasture, allowing parasite larvae to mature and die off from environmental exposure in the rested pasture.

3.  Pick up manure in pasture spaces at least weekly and harrow to spread manure only during hot, dry periods.

4.  Compost manure before spreading on fields.  The heat generated in the composting process kills parasite eggs. 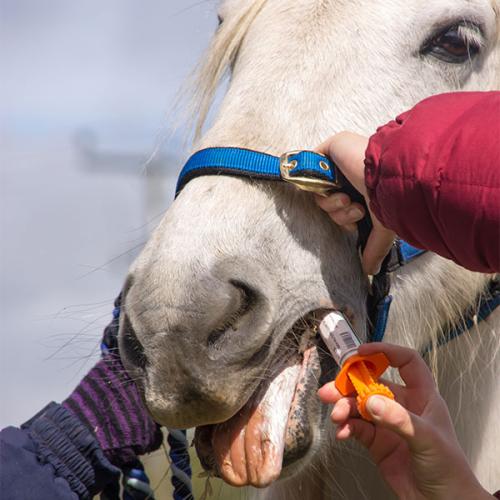